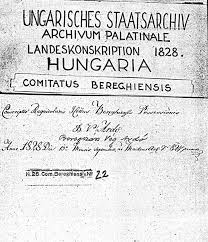 This link below is about one of my heroines in the world of Hungarian genealogy. I was looking at the LDS film catalog for anything I could get my hands on about Hungarian church records and censuses one day when her name popped up as the compiler of these books about the Hungarian 1828 Land census. They are called  Germans & Hungarian - 1828 The Hungarian Land Census.
Immediately, using the statistics of Hungarian Americans living in our community, I hassled the local Genealogy section of my library to buy them. I became truly inspired by this woman who started at the age of 65 to transcribe the 1828 censuses to help other researchers. It was her work that inspired me to transcribe the 1869 Hungarian Census for certain villages in Abauj in the past 10 years as these were not indexed. Family Search has taken great strides in indexing baptism records in Hungary but they have not touched censuses as far as I know.
Her story convinced me that helping others look for the needle in the haystacks is very rewarding. I love the quote from this reporter's article about her
"At 82, Martha's motto is ...
"Don’t give up—do it now!!!"

Her books 1 online at Family Search can be seen, some digitally, at https://familysearch.org/search/catalog/450353?availability=Family%20History%20Library.
Some are also at World Vital Records which has been vought out by MyHeritage so now linked here at MyHertiage
http://www.worldvitalrecords.com/contentsearch.aspx?p=Hungary
1. Thank to Lisa, at http://about.me/smallestleaf
Posted by Magda at 2:09 PM No comments: 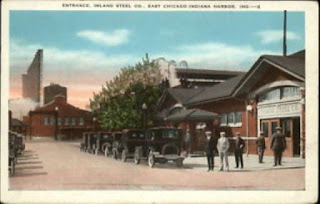 I knew we had cousins that worked in the steel mills of Indiana Harbor. What I did not know is that it was a huge sprawling industrial community that still remains active today. The canal and harbor sprawled out over several years, beginning in 1901, as the company expanded. Many immigrants lived and worked in East Chicago. Inland Steel Company is where three generations of these cousins worked, lived and died.

When I did some research for a cousin's extended family, I was surprised on how large it was and how awful the census enumerator spelled the foreign names in the 1900, 1910, 1920, even the 1930 census in East Chicago, Indiana. No wonder people thought their families were hiding behind doors or under the beds when the Government man, aka the census taker, came knocking at the door. It was against the law to avoid them. They always come back. A former client contacted me to look for an ancestor in East Chicago. Clearly, the client's people lived on the same block for 50 years according to the city directories. However, in any census index compiled by FamilySearch or Ancestry, they never existed. Scrolling through the actual images of the census, page by page, is how I found them but one could easily miss them as their names were so convoluted.
A great tool for unscrambling surnames spellings in census databases is at the Steve Morse website. If anyone is not familiar with Steve Morse and his wonderful work with the algorithms of search engines, he is a genius. The site is located at : http://stevemorse.org/
SOME TIPS:  You can wildcard your surnames on Ancestry or Family Search with * or ?  characters. For instance, for the name Plachetka, I would use the variations of Pl?hch*k* or Plachet* in the surname search box and in American censuses, put the birthplace as  "Hungary" or "CzechoSlovakia" or "Austria-Hungary" (as the political bondaries changed for many Hungarians after 1918). Hopefully, with these tips, your relative will not remain incognito!
Posted by Magda at 2:04 PM No comments:

Keiser is a German name, ethnically. There was a period in the history of the Jablonca when many German settlers settled along with Goral Poles, Ruthenians, Jewish and Slovakian families in Jablonca. Of course, many intermarried into Magyar families. Colonization of abandoned villages in Northern Hungary was very popular as many Germans were invited to settle there by the Empress of Austria, Maria Theresia. After many years, they were not considered foreigners. There is one Keiser family that settled in Jablonca many years before they were recorded in the 1869 census. There was no Lutheran church so they went to the Catholic church or converted to the Calvinist church eventually.

Some of the other ethnic German names in Jablonca recorded in the 1869 census were Gretzmeyer, Keller, Herczog, Beller, Krisoff and Zeman.

One of the greatest thing about the 1869 Hungarian census is how they enumerate the women for the census. They are enumerated by their birth names, even if they are married. Occasionally, a widow is given the suffix - “ne" at the end of her husband's name, such as in the name, for example, Mihalyne Nagy, which means "Mrs. Mihaly Nagy" with the "ne" signifying the Hungarian form of "Mrs".  But the majority of married women are listed with their maiden names. I do not know of any other census from any other country that lists married women with their own birth surnames. This custom is also reflected in the majority of Hungarian church records as well.
In constructing families from parish records in Hungary, its pure joy to land upon records for females being recorded under their maiden names.
Until about the 18th century, it’s noted that Hungarian noblewomen kept their names at marriage and their children received their father's name[1][2]. However, there is the unpredictable problem of what form the registrant (clerk, scribe, minister, and priest) will use to record a female ancestor’s name. Most women could not read or write so they would not be the author of their own names in older records.
It’s interesting to wonder if the women that were enumerated in the census households in 1869 were present to give their names verbally as they wanted it to be known.
So while combing through records, it’s important to be alert of three variations while looking for a female Hungarian relative in records,
1. The woman may go through her life with her maiden name, even in marriage.
2. The woman may keep her first (given) name combined with her husband’s surname.
3. By the old, traditional Hungarian custom, she may inherit her husband’s entire name with the “ne” added at the end, therefore her real Christian name and maiden name will not be found.
4. Very rarely will she annex her maiden name with husband’s surname with a hyphen (the modern way) as in Nagy-Toth.
No doubt, that name variation No.3 poses many headaches for genealogists when the woman is only known officially, in records, as Mrs. So-and-So. This can happen in any country but luckily, the custom in Hungary does give an advantage that her maiden name will be recorded. [3][4]
In the example below, this Szilaszi family had married females in Jablonca, house No. 74. Zsusanna Toth, Erzebet Nagy and Julianna Klimko are listed with their maiden names. It’s much easier to pair up and solve family groups in family trees when you have the mother's or wife's maiden names. 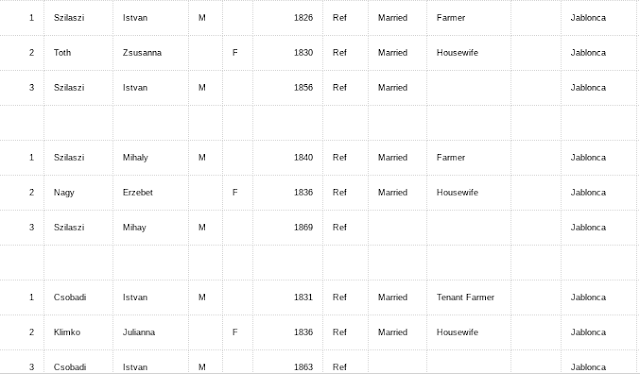 My Stermenszky One Name Study at the Guild

Magda
My original website was a Drupal website called "Hungarian Family Record" while I was working as a researcher. I have since "retired" from research and highly recommend Nick Gombash (nick.m.gombash@gmail.com) for your Hungarian Research. Finally working on my own family as well as two One Name Studies at the One Name Guild. I migrated my old articles from the Drupal site here to Blogger here.